While most of Alabama contributed their vast agricultural yield to the war effort, Birmingham contributed its industrial resources. Jobs that were lost due to the Great Depression began returning to Birmingham between 1939 and 1941 as America began supplying their allies with food, weapons and machinery.

In order to encourage interest and funding for the war, the U.S. government started a propaganda campaign encouraging civilians to participate in the war effort by “fighting on the home front.” Through rationing, Victory Gardens, collecting scrap metal, volunteering at hospitals, and working in factories, many of Birmingham’s citizens contributed to the war effort.

Nearly 85percent of Birmingham’s businesses were involved with the war effort. The iron and steel industries easily transitioned to wartime production. Furnaces that closed during the Great Depression reopened in order to meet the demands of the War Production Board contracts. 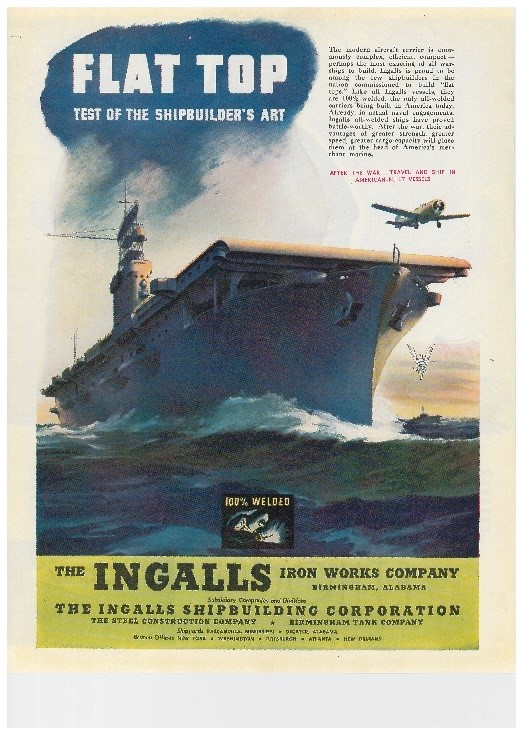 Notice the phrase “After the war.” In 1943, there was no guarantee of the war’s outcome. However, confidence in American mass-production was well-placed as the U.S. and Russia decisively outproduced Germany, contributing greatly to the Allies’ victory. 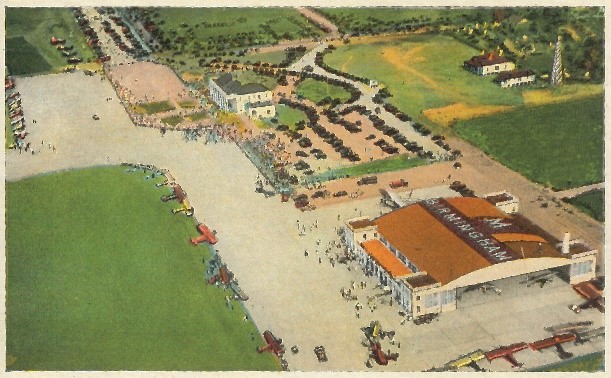 Birmingham’s Municipal Airport (also called “Birmingham’s Million Dollar Airport”) was built in 1931. In 1942, Birmingham leased the Birmingham Airport and runways to the U.S. Air Force for one dollar a year to test-drive planes before sending them into combat. 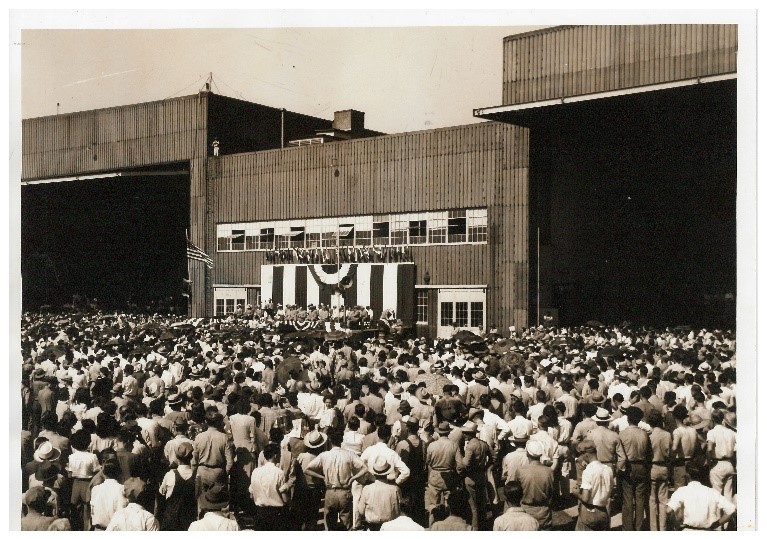 Bechtel-McCone-Parsons Modification Center broke ground on a new modification center nearby on January 15, 1943, under the supervision of the U.S. Air Force. BMP’s Birmingham-to-Berlin Bomber Plane Project finished B-24 Liberators, B-29 Superfortresses, P-38 Lightnings, and A-20 Havocs (combat planes.) BMP completed half of all B-29 airplanes produced by the U.S. during World War II. 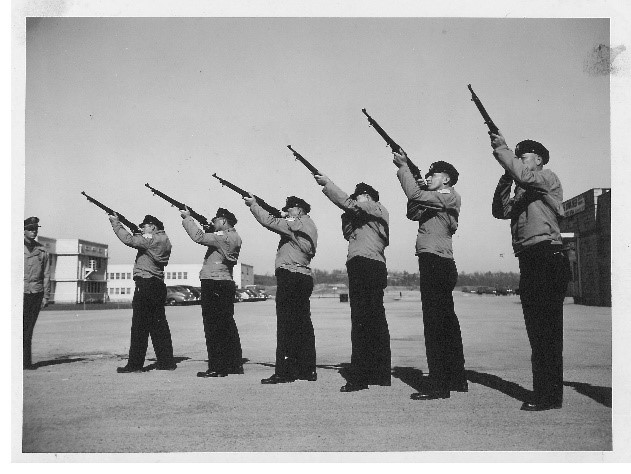 The Bechtel-McCone-Parsons Honor Guard on the airstrip, posing for a publicity photo.

Life on the Home Front 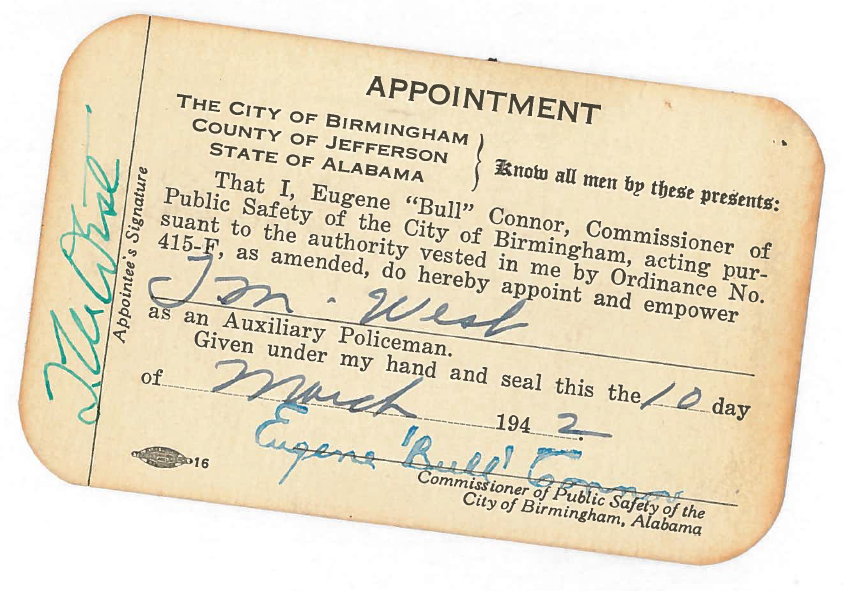 The Office of Civilian Defense was started on May 20, 1941 by President Franklin Roosevelt as a way to prepare for potential war. In addition to an Auxiliary Police Force, there was an Auxiliary Fire Department, Road Repair Crews, Air Raid Wardens and others.

Thomas West’s appointment to the Homewood Auxiliary Police Force was signed by Eugene “Bull” Connor, who later became a key figure in the Civil Rights Movement as Birmingham’s Police Commissioner during the Birmingham Campaign in 1963. Birmingham History Center Collection at Vulcan Park and Museum, courtesy of Thomas M. West, Jr. 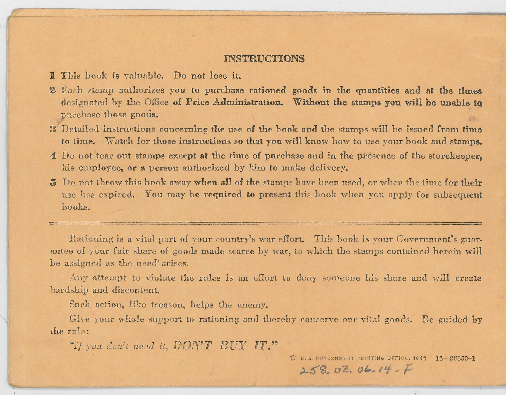 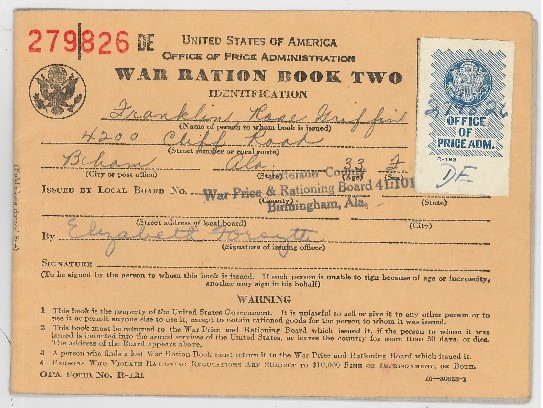 During the war, every American was issued a series of ration books for everything from food to gasoline. In order to purchase goods, citizens would include a removable stamp when paying their grocer or gas station attendant. Once the stamps were used up, citizens were unable to purchase more of those items without special permission. This system was administered by the U.S. Office of Price Administration and was used so that plenty of resources could go to supplying the military.

By creating recipes that catered to the newly rationed food, people made the most of their rationed staples such as sugar, coffee, or flour. 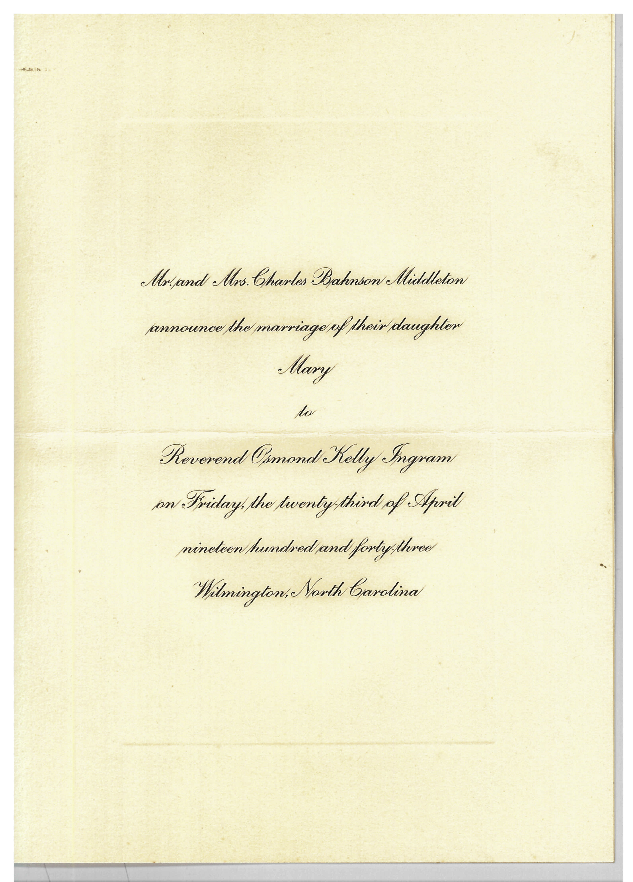 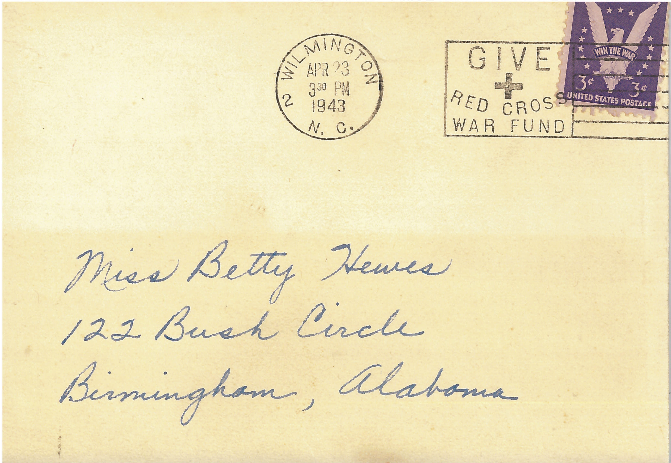 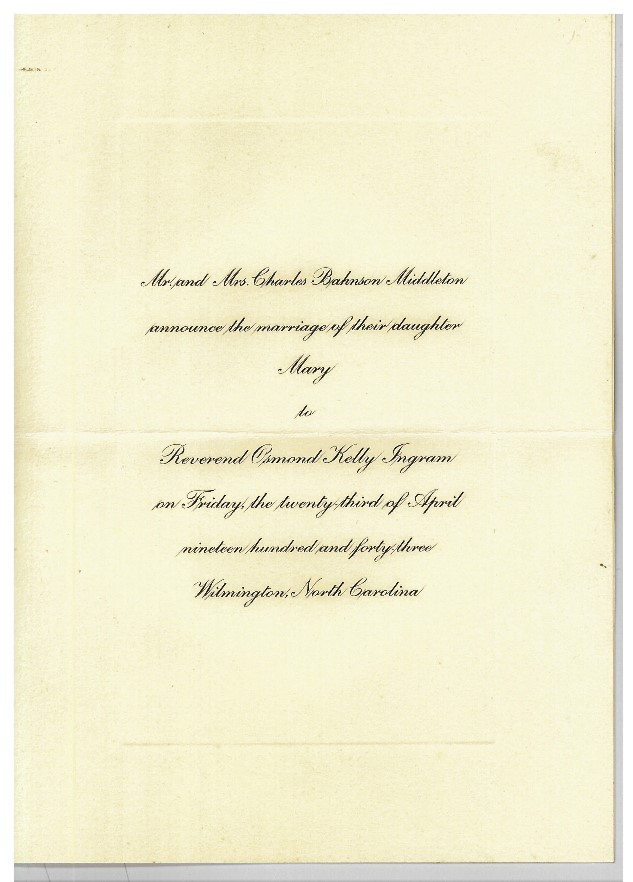 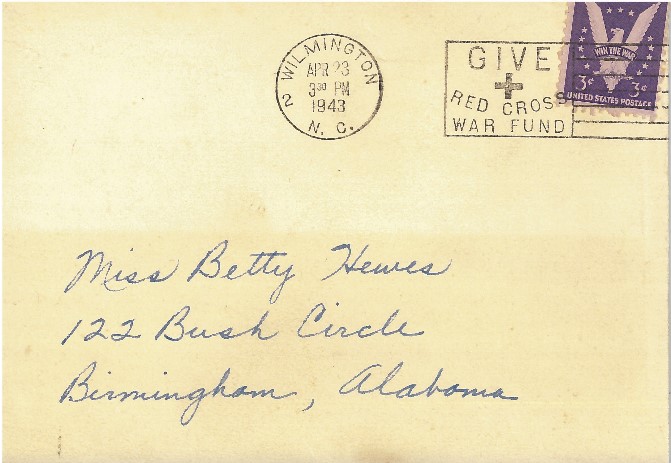 In 1942, the Home Front was a battle waged even on wedding invitations. Note the stamp encouraging donations to the Red Cross War Fund and the postage stamp that reads “Win the War.”

Notice the groom was the Reverend Osmond Kelly Ingram.. Ingram was the nephew of the WWI veteran and Birmingham native, Kelly Ingram, for whom our city park is named. 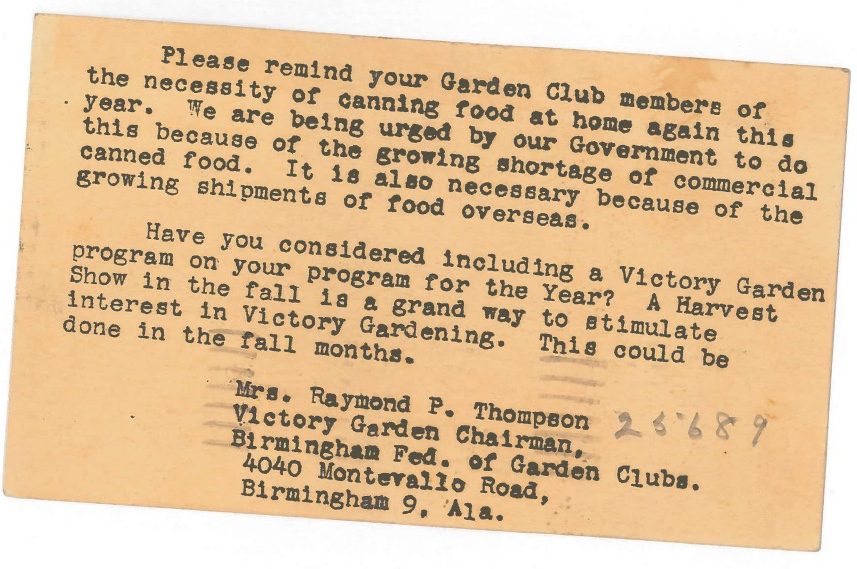 Victory Gardens were planted throughout the U.S. during World War II. Eleanor Roosevelt even planted one at the White House. The goal was to lower vegetable prices for the army so the military could spend money elsewhere. 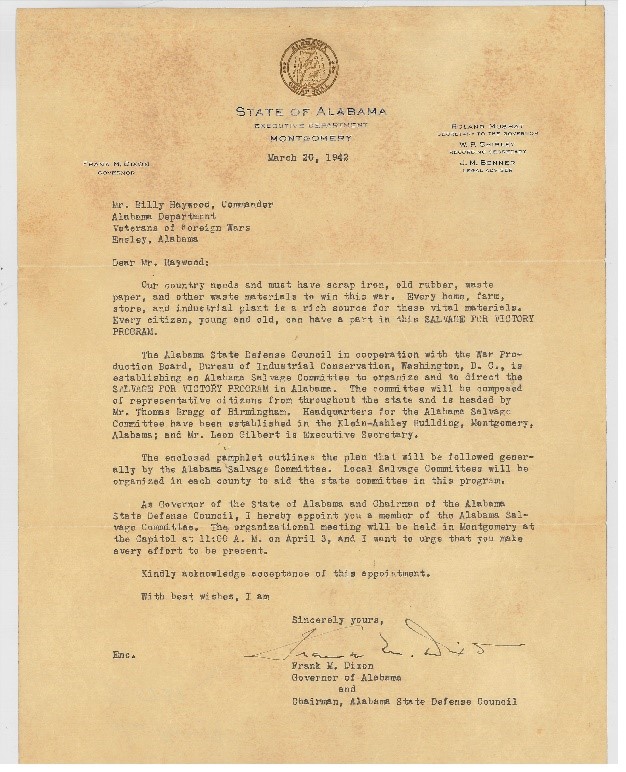 The government held scrap drives for metal and rubber to save on cost of production for war machines. Most natural rubber reserves were in Asia and inaccessible. Scrap became necessary for making tires and other parts for nearly every war vehicle. 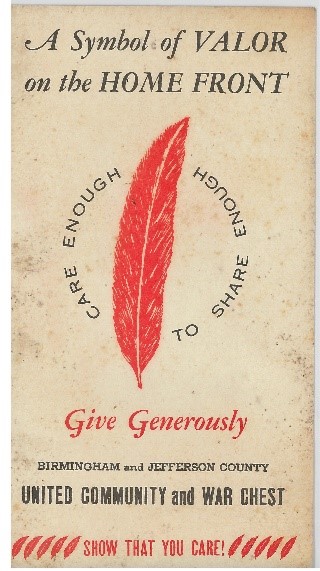 The United Community Chest existed before the war as a way to raise money to help people in the community. During the Depression, the federal government started contributing to community chests all over the country. During the war, the United Community War Chest raised money for many projects that helped the war effort. It still exists today as United Way. 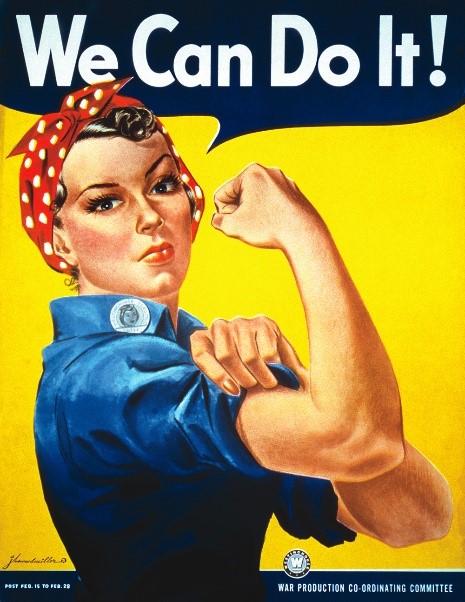 With men away at war, women took over many jobs typically occupied by men. These women were known as “riveters,” an idea made popular by the “We Can Do It” campaign encouraging American women to join the workforce to help with the war effort. The percentage of women in the American workforce rose from 25 to 36percent during the war.

Frances Carter, founder of the American Rosie the Riveter Association  was a Birmingham native and worked at Bechtel-McCone-Parsons as a riveter during the war. The ARRA collects stories of other Rosies, including those of many Birmingham women. 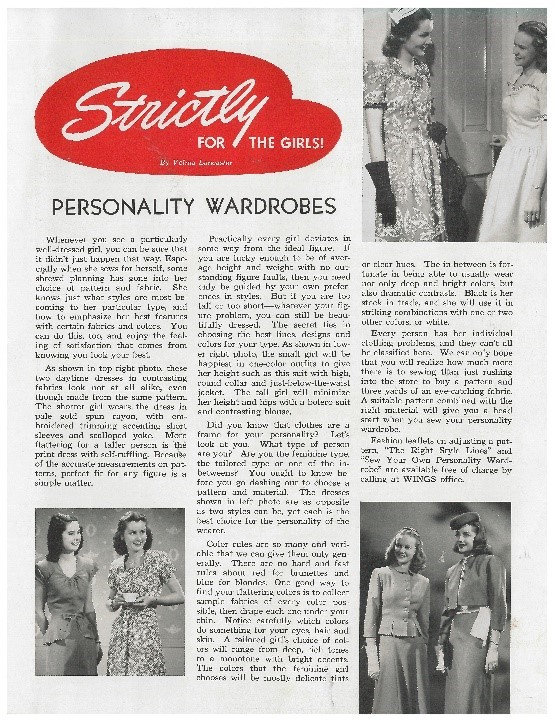 Here is a page from “Wings of Birmingham,” the monthly magazine published for and by Bechtel-McCone-Parsons employees. Appealing to their female employees, the article supplies some tips on choosing and sewing their own wardrobes.

The City of Mountain Brook has partnered with Vulcan Park and Museum to display objects from the museum’s collections in a display case in their city hall. These displays rotate every four months. To see many of the objects from this post and more, be sure to visit Mountain Brook’s City Hall lobby, located at 56 Church St, Mountain Brook, AL 35213 before November!

_____________
Guest Blogger, Ellie Guyader is a student at NYU majoring in both History and Social & Cultural Analysis and worked as a Curatorial Intern at Vulcan Park and Museum during the Summer 2019 semester. Her exhibit, Birmingham’s Home Front, is on display in the lobby of Mountain Brook City Hall until November 2019 and features artifacts from the Birmingham History Center Collection at Vulcan Park and Museum, some of which are pictured above.