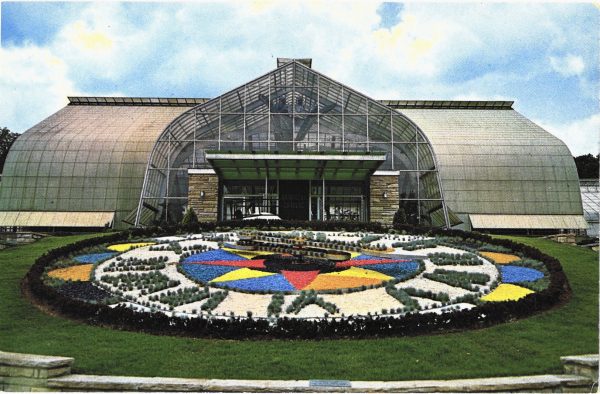 Birmingham Botanical Gardens, Birmingham, Alabama Floral Clock in front of the Conservatory, a gift from Mrs. Horace Hammond and her daughter.

Creation of the Botanical Gardens

In 1961, after years of trying and failing to make his dream a reality, Birmingham Mayor James W. Morgan finally came to an agreement with the Park and Recreation Board establishing the Botanical Gardens. The city constructed the gardens on 69 acres of Lane Park, just east of the Birmingham City Zoo, on the south side of Red Mountain. Mayor Morgan began looking to other botanical gardens in North America, hoping to find inspiration. His search led him to the impressive greenhouses of Montreal’s Botanical Gardens. He quickly traveled to Montreal to tour their gardens with their curator Dr. Henry E. Teuscher. Impressed with his work, Morgan asked Dr. Teuscher to design a plan for Birmingham’s gardens.

The mayor wanted Birmingham’s Botanical Gardens to be the largest of its kind in the Southeast. With this in mind, Morgan put in place a Conservatory Advisory Committee. Their goal was to serve as an independent board of trustees tasked with controlling the gardens’ future. Working to make his dream a reality, the newly minted committee brought plants from all over, including Frankfurt, Germany; Montreal and Niagara, Canada; and Asheville, North Carolina. Their work helped create a garden that, since its opening in 1963, continues to wow visitors. The postcards below provide a glimpse of the varied collection of colorful flowers and plants enjoyed by visitors then and now.

In 1965, two years after the Birmingham Botanical Gardens opened to the public, the Japanese Gardens project began. Money was raised from the surrounding community to fund the project. A local architect by the name of Darcey Tatum and Masaji “Buffy” Murai, an architect from St. Louis, were selected to develop the garden. Rock and earth from Mountain Brook were moved to the gardens to form mounds, waterfalls, lakes, and an island. The tea house was brought to the gardens from the New York World’s Fair thanks to an agreement reached between U.S. Senator John Sparkman and the Japanese ambassador. After two years of hard work, the Japanese gardens opened to the public on May 6th, 1967, with a ceremony led by the Japanese ambassador. The final product covered 7 ½ acres of land, and the Japanese Consul of New Orleans recognized it as “bigger and better” than the Brooklyn and San Francisco Japanese gardens. Years later, in the early 1990s, the tea house had grown unstable and was in sore need of repair. Pieces of the first tea house, along with new materials from Japan, were used by one of the original designers, Kazunori Tago, to craft a new tea house in Japan. After Kazunori Tago finished its construction, the tea house was disassembled and brought back to Birmingham, where it was reassembled and still sits today. 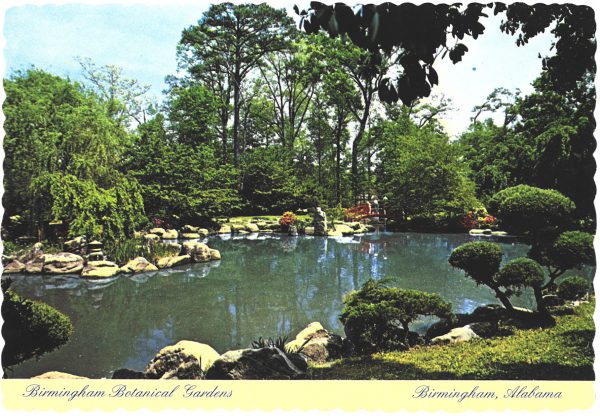 This postcard shows the lake located in the Japanese Garden. The back of the postcard describes the garden as a beautiful place to take a quiet walk through colorful flowers and trees in the spring and fall. It also describes other areas within the park that visitors can enjoy throughout the year, including the rose gardens, wildflower gardens, and the arboretum. 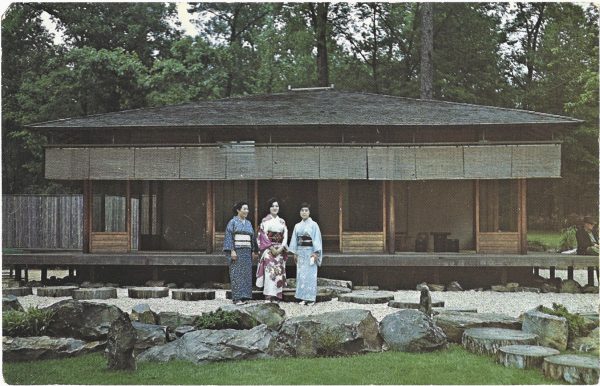 This postcard shows the Toshin-an or Japanese tea house meaning, “the house where those gathered can light a wick [of understanding] in each other’s hearts,” located in the Japanese Gardens. Three women wearing kimonos stand in front of the tea house. The chanoyu, Japanese tea ceremony, is still conducted at the tea house today on special occasions. 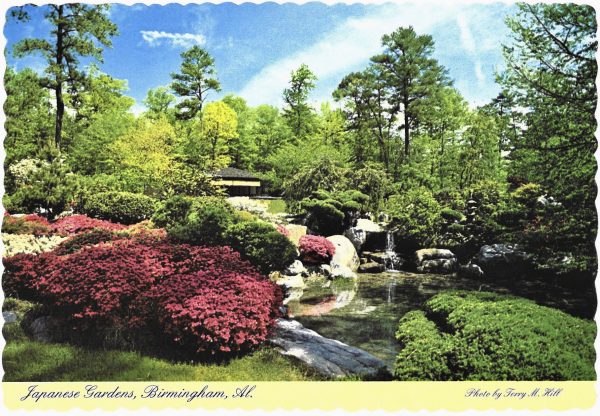 Scene of the Japanese Garden, looking across a small waterfall and pond up through green and red plants and back towards the tea house just visible in the distance. The Japanese Garden includes many pathways that weave past colorful flowers, through tall bamboo, and overlooking calm waters. 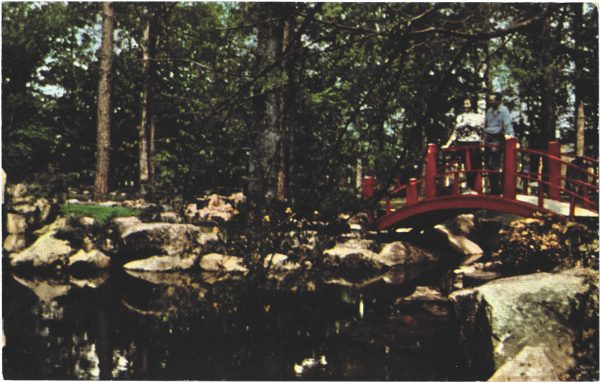 Image of the red bridge over the lake located in the Japanese Garden. Two visitors stand on the bridge overlooking the lake, facing out towards the rest of the garden.

Below is a collection of postcards with images from inside the Conservatory. The garden’s clear-span conservatory was the largest of its kind in the Southeast when the park officially opened to the public in 1963. The Floral Clock, situated in front of the glass conservatory, was a gift from Mrs. Horace Hammond and her daughter. The building is home to many tropical plants such as coconut, banana, vanilla, coffee, cacao, and tropical species of palms, cycads, and tree ferns. Expansion plans are in place to add to the diverse collection of plants in the Conservatory as funding is available. 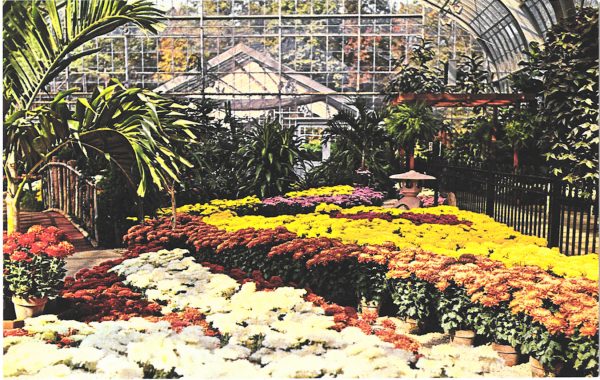 Image of the flowers inside the Botanical Garden’s Conservatory during the annual Fall Chrysanthemum Show; red, white, and yellow flowers fill the room. 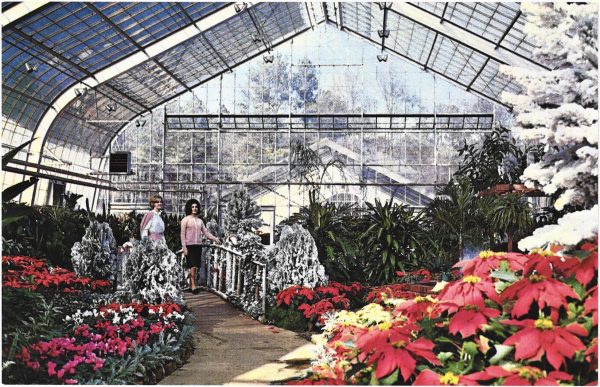 Image of the Conservatory during the Christmas Show. Poinsettias are the central flowers featured, along with snow-covered trees and plants. Two women are visible walking across the small arched bridge inside the Conservatory.

If you would like to learn more about the Birmingham Botanical Gardens, visit the sites below!

Emma McLean is the Museum Programs Project Assistant at VPM. She works with the collection to help catalog artifacts and digitize records; she also helps research, design, and install exhibits within the community. When Emma is not working, she enjoys playing video games, cooking with family and friends, and traveling whenever possible. Soon she’ll begin a Museum Studies Master’s program in the UK.